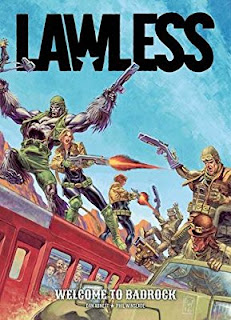 I keep hearing about Lawless, you know. Every time someone mentions it, it's accompanied by a reccommendation to read it, because it's so freakin' great. Naturally, I resisted, because no drokker tells me what to read lessen I tells em to, or something like that. Well, Rebellion have released the first book in the Lawless saga so that You, too, can bang on about how good it is to people, because it's a corker.

Lawless is, in Abnett's words, " a kind of sequel to Insurrection", featuring as it does a frontier planet poplulated by humans, uplifts (smart monkeys) and free robots (who have their own church). the setting is the mining town of Badrock, where the law is enforced by the town Judge Marshal. thing is, the last Marshall (a psi judge no less) went totally hatstand after three months and now lives in the cells. Enter Judge Marshal Metta Lawson, who is kind of a badass. She's helped by her deputy, the paperwork loving Nerys Pettifer, and naturally picks up a couple more strays as the story moves along. 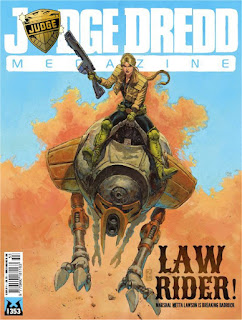 At heart, lawless is a traditional Western tale - a new sherriff comes to town and tries to clean it up. It's very much a part of the Dreddverse, with the Judge removed from her normal setting and given a totally new playground with new rules. There's a constant mystery surrounding Lawson, who may not be who she says she is, but even if she isn't she certainly does a good, honest job. The supporting characters are pretty well rounded in the main, and the speech patterns throughout mirror the overy wordy old west much more than Mega City 1. 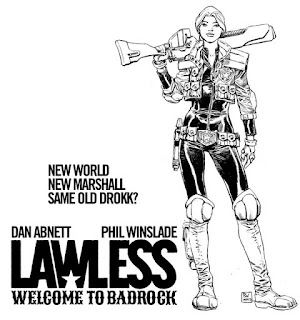 Special mention must go to Phil Winslade for his black and white artwork. The detail in character and settings is phenomenal, giving real heft to the frontier world and mixing old west and future tech marvellously. At times it almost seems like he's handed in unfinished pages, but it only serves to give greater effect, and this is a book you can pour over, taking in every detail rather than skimming. If Winslade is given a crowd scene (artists kryptonite) he steps up to the plate every time, creating a town full of characters who are un named but still very real.

Lawless is, as you may have guessed, highly reccommended. A gripping, action filled yet still amusing tale that is beutifully illustrated throughout. Metta Lawson is a lady not to be messed with, yet has a charm and empathy Anderson never quite managed. Dan Abnett and Phil Winslade have created a title that will go down in 2000AD and Judge Dredd history as one of those rare times when everything just went right.