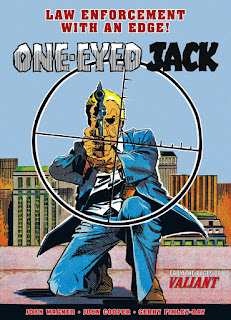 In the UK comics scene of the 70's it was a bit of a thing to watch what Hollywood was doing and rip it off. Not so blatently that you got sued, of course, but taking a successful film and adapting it's themes worked rather well, notably with Jaws and the shark strip Hookjaw in Action. One Eyed Jack was basically John Wagner's take on Dirty Harry, with the strip set in 70s New York - unusual for a UK strip in those days.


One Eyes Jack is detective Jack McBane, who earns the 'One Eyed' bit in the first episode. Of copurse, he's such a badass that he's back on the street as soon as possible dealing the kind of justice only a man with no depth perception can deal! This isn't subtle stuff, with the violence matter of factly plastered over the page and the good guys winning in the end. Jack likes to speak in soundbites, and astute readers will certainly see parallels between him and a certain Judge that Wagner would go on to co create a few years down the line. I couldn't help but grin when the villain in an early story says "Izzat so?", later to be a staple phrase of Dredd villain Mean Machine. 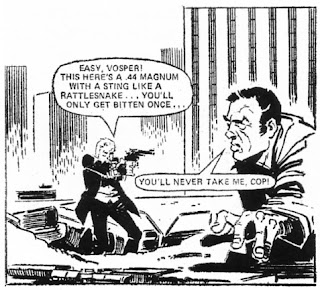 The artwork is very much of the time, and luckily it's by one of the most enduring British comic aritsts, John Cooper. Black and white throughout, the action leaps out of the page, with all the villains having nasty, sneery faces and the good guys radiating bravery. Great stuff, really, and although he wasn't the best of the time, Cooper was always a solid storyteller who could take a script and get the best out of it.

As far as the stories go there's nothing too surprising here. McBane goes through criminals like a knife through butter, and of course at one point he gets framed for a crime he didn't commit. We get soundbites at the top of the page like "Sensation! One Eyed Jack goes to jail!" and plenty of hackneyed dialogue, but it all manages to hold together and you end up with 150 or so entertaining pages of pure seventies action. 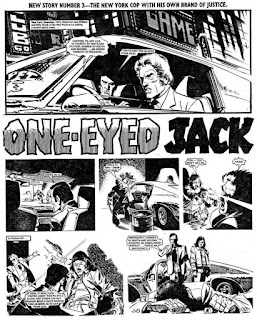 One Eyed Jack is a slice of comic history, and certainly of it's time, but I can see youngsters of today enjoying it, due to the immediate nature of the storytelling and the uncomporomisibg action throughout.  2000AD publisher Rebellion have bought an absolute shedload of similar gems (Leopard Of Lime Street anyone?), and with their track record there's a lot more quality reprints to look forward to. Definitely worth a look, the only downside is no cover mounted gift.