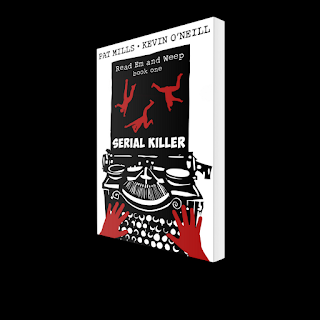 For anyone who recognizes the names at the top of the page, it wouldn't be unusual to expect this to be a review of a graphic novel of some kind, known as they are in the comics community as a first class writer and artist respectively. I picked this up at 2000AD's 40th birthday celebration, and it's quite obviously a bit of a labour of love for the veteran creators.

The story is set in the seedy world of 1970s comic publishing. Not the merry Marvel bullpen or anything like that, but instead the British humour machines that would crank out the likes of Buster, Whizzer & Chips and The Beano. Mills himself was a big cog in the UK comics machines, from kids comics to girls comics to war comics and beyond, so is well placed to satirize the industry.

Our hero, if he can be called that, is Dave. He works on a kids comic and hates every minute, loathing the stupid little imbeciles who get pleasure out of what he sees as a rubbish, unfunny comic. The most popular strip is the 'Caning Commando', a bizarre wartime tale that sees a headmaster behind enemy lines beating the Hun on the bum, basically. It's quite mental, and great fun to read Mill's episode descriptions. the strip is scripted by a bumbling old fool known as 'The Major', and Dave doctors those scripts so that they contain plenty of ways for kids to kill themselves, such as swimming at night in a disused quarry, making a pipe bomb or trying to breathe through a plughole to stop from drowning in a bath.

So we have Dave trying to kill kids from a distance, which is all well and good (and funny), plus his smarmy colleague Greg, a handsome Yin to Dave's hopeless Yang, and their shared love interest Joy, a rather strict girls comic editor. Add to this Dave's sexual interest in fur and the fact his dead mum wants her to solve her murder and you have a very bizarre story indeed.

What you should know about 'Serial Killer' is that it's funny. Many I time I found myself sniggering at the ridiculous characters, occasionally at the real life anecdotes such as the writer who claimed to make 'More money than the Prime Minister', such was his prolific output (names are obviously changed to protect the talentless). Dave works for a Fleetway type company, all the time envying the superior output of Angus, Angus & Angus, themselves a parody of DC Thompson, the legendarily miserly company behind The Beano and The Dandy. Aficionados of British comics will find much to love here, but the knowledge of such things is not essential to enjoyment of the tale told.

'Serial Killer' is the first in a series (with a cliffhanger finale), and after finishing it I hope Mills and O'Neil get a wriggle on with the next one, as it's tremendous fun to read. The whole thing comes across as similar in feel to Robert Rankin's 'Brentford Trilogy', set in an all to real 70s London, populated by characters who are all quite mad in their own way. If you have an interest in comics, laughing or having sex with a fur coat, this is the book for you, you dirty, dirty sod.