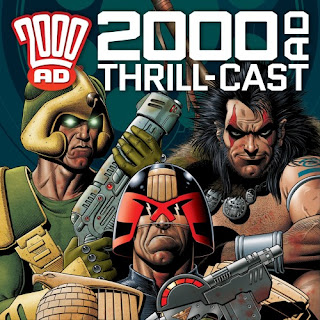 Greetings, or as 2000AD Thrillcast host Mike Molcher would have it, 'Borag Thungg Earthlets'. For those unfamiliar with the intricacies of the self proclaimed Galaxy's Greatest Comic, it's alien  editor, Tharg (The Mighty), has his own lexicon of phrases that only the dedicated can be arsed to learn. It's all part of the fun, though, pointing at a fan base that is quite happy not to take itself too seriously.

The Thrillcast has been going for just over a year now, and has featured interviews with a multitude of creators as well as a question and answer segment with Tharg himself (herself? has this ever been clarified?) and other bits and pieces. The reason I have decided to bring it to your attention is the recent three part interview with co-founder John Wagner. The man is deservedly a legend in comics, surely the British equivalent of Stan Lee, although Wagner is an immeasurably better writer and always has been. Along with Pat Mills he created Judge Dredd, the ultimate British comics icon, when they were asked to stitch together a sci-fi comic almost 40 years ago. 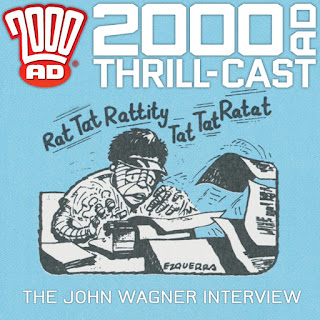 Molcher himself conducts the interview in fine fashion (as he does throughout the 'casts), coming over very much like Richard Bacon. It might just be me, but I like Richard Bacon so it's a good thing. John Wagner is happy to talk about anything at all, and if I'm honest the three hour overall running time could have been doubled and still leave questions unasked, such has been the output of the man. Part 1 is a little dodgy, having been recorded in a busy pub, (a lousy decision in anyone's book), but when they decamp to Wagner's home it's a much easier listen. Molcher is a big fan and it shows in the questions, and you get the impression he's in fanboy heaven, much as I myself would have been. It's informative and entertaining, and the true seal of approval is that I was annoyed when it finished, wishing that there had been time for a few more topics (Wagner's crass use of racial stereotypes, for example). Ah well, at least his Alpacas are included.

These three podcasts are a good place to start if you've not discovered the 2000AD Thrillcast yet, but once you've been Wagnered up I recommend downloading the rest, because if you are a fan of the comics they really are a pleasure to listen to. I myself have a keen interest in comics from the 70s onward, and the interviews with creators who were working at the time often provide priceless insights, and the joy is that 2000AD has had a multitude of talented individuals pass through it's doors, so there's many more to come. 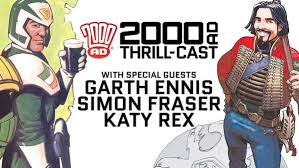 In short, don't be a Grexnix, have a listen to the 2000AD Thrillcast.