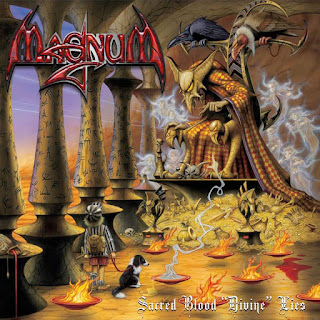 Incredibly, this is Magnum’s eighth studio album since reforming in 2001, only two less than their output beforehand. Maybe it’s time to judge Magnum on what they are now, rather than what they were, and stop crossing fingers and waiting for ‘…Storytellers’ part 2. The simple truth is that Magnum remain an astonishingly consistent rock group, and as such this new album will delight existing fans whilst having enough quality to hook a few new ones at the same time.

The title track opens the album, and as expected it’s Tony Clarkin showing his usual disdain for religion. More than that, it’s a huge melodic stomper with a very Magumesque break in the middle. It bodes well for an album described in the press release as being ‘among the group’s most dynamic releases’. The track itself is certainly a highlight of the album for me, along with ‘Quiet Rhapsody’, a quieter song with a solid, catchy guitar refrain and excellent vocal work from the ever reliable Bob Catley. That said, this isn’t an album with any weak tracks at all, full of guitar heavy bruisers that have will have old fans such as myself doing the Bob Catley arm movements as they listen and sing along. There’s no short, sharp fixes, as all the tracks clear the four minute mark, but those hoping for a Clarkin magnum opus will be unsatisfied, as nothing reaches the seven minute mark either.

‘Sacred Blood…’ is, in my eyes (and ears) the finest Magnum album since they returned, purely because of the sheer quality of the whole thing. There’s no temptation to skip a track, and each has it’s own merits whilst resolutely remaining Magum-like in essence. ‘The Gathering’ compilation was a fantastic reminder of what modern Magnum is all about, and took the standout tracks from several albums. ‘Sacred Blood…’ matches those standout tracks, with Clarkin choosing  wisely from the 25 tracks he had written, narrowing it down to a solid ten. Well, I say that, but the digi pack has three extra songs that I didn’t get sent. Boo! What I do have, though, is a Magnum album that I know will remain a favourite.