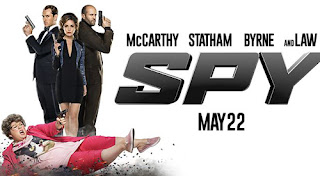 I have to admit straight off the bat that I enjoy watching Melissa Mccarthy. At her best when allowed to insult people in creative ways, she is also a dab hand at injecting real pathos and soul into characters that otherwise could have been rather one dimensional. In ‘Spy’, she adds another string to her bow, perhaps an unlikely one – action star. 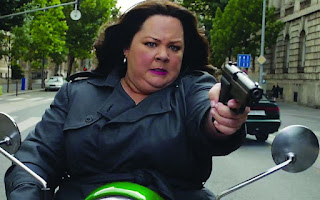 McCarthy plays Susan Cooper, who is the partner of super spy Bradley Fine (Jude Law). When I say partner… he goes out and does all the spy stuff and she sits in ‘The Bunker’ directing him and basically doing her best to keep him alive, something she does very well, and we are left in no doubt that Susan is a smart woman who secretly loves the pants off her distant partner. When he gets a bit dead, thanks to evil bitchbag Rayna (Rose Byrne), the agency are told in no uncertain terms that said bitchbag knows every one of their agents. The plan, then, is to send someone she could never know, and as Susan is actually a fully trained field agent (who has never been in the field) she should go on an important surveillance mission involving Rayna and a nuclear bomb. What could go wrong? 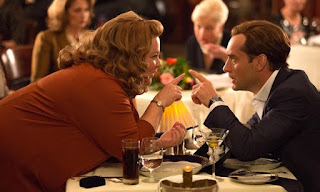 The best news about ‘Spy’ is that it’s written and directed by Paul Feig, who worked so well with McCathy in ‘Bridesmaids’ and ‘The Heat’. Her character this time round is more mousy than the ones played in those movies, but fans will be glad to know that about two thirds of the way in she is allowed to let the inner demon out to play and boy does it like to play. Profanity and very creative insults sparkle across the screen, as McCarthy also kicks some serious ass in one particularly well directed kitchen fight scene. 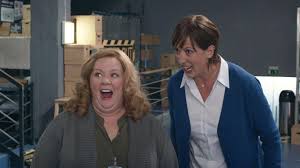 Although two hours long, ‘Spy’ is continuously entertaining. Jude Law is convincing as a super spy, Allison Janney works well as the CIA Director, Miranda Hart makes a decent Hollywood break as (shock horror) a clutzy big posh girl, and Rose Byrne looks spookily like Madonna, which makes her character even easier to loathe. The standout supporting cast member, however, is Jason Statham ad Rick Ford, a spy who has plenty of ludicrous tall stories that get sillier and sillier (‘See this arm? It was ripped off then sewn back o by the other arm’). Statham gets to play comedy, but plays it totally straight (without having to use his awful American accent, thankfully) and provides plenty of laughs. 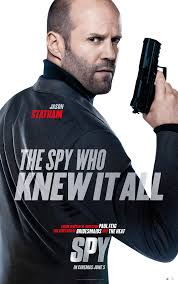 In a nutshell, ‘Spy’ is a fine addition to Fieig and McCarthy’s joint CV, and if you liked their previous films you’ll love this one. It’s smart, has an actual plot and is sooooo funny all the way through. I look forward to what they come up with next.