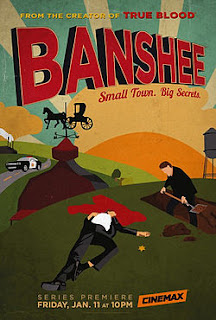 A Nice Place To Visit? No.

As Banshee prepares to make it’s UK debut courtesy of Sky Atlantic on Monday 29th April, I thought it would be a good time to let the curious know what they will be in for when they take a trip to the Pennsylvania town.

First up, there are minor spoilers here, but nothing that will ruin your enjoyment of what is a surprisingly good show. I say ‘surprisingly’ because when you watch the first episode you will be wondering what the hell is going on. Antony Starr plays the un-named protagonist, released from prison and immediately running for his life, eventually reaching Banshee in search of his old girlfriend, now married to the local district attorney. Who is after him and why isn’t explained, suffice to say they mean business. Instead of entering the town proper, he settles in an old bar on the outskirts, run by ex boxer Sugar. The two get on, and are soon joined by a another newcomer by the name of Lucas Hood. Hood is also steering clear of town for now, because as it’s brand new sheriff he knows as soon as he goes in there will be no relaxing for him, hence a quiet stopover in the bar for a meal before starting. By the end of episode one the new sheriff has carked it and Starr’s character has decided to take a chance and steal his identity, therefore becoming the sheriff, as you do. 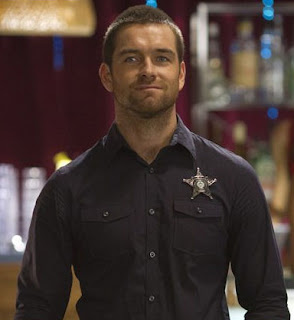 Sheriff Wolverine At Your Service

This probably sounds highly unlikely to you, and that’s a fair shout, but it sets up the story perfectly, and by the third episode (which features the most brutal one on one fight I have ever seen on screen) you’ll have stopped worrying about it, so engrossing is the slowly unfolding story. We find out why Hood (the only name he is called, so we’ll use it from now on) is running, who from, and plenty of other stuff through very, very effective flashbacks, including some dark, powerful prison shit. Seriously, I can’t remember a programme that has had me wincing or mouthing “Oh SHIT” as much as Banshee. The violence is brutal and at times lengthy, and whilst you doubt anyone could actually take the punishment given there’s plenty of bloodied faces and broken limbs. Subtlety is for other shows. 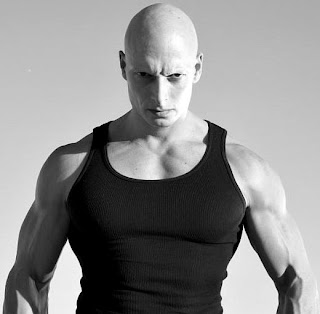 Hint: This guy does NOT like to be fucked with 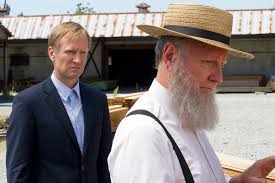 The cast is pretty good, with Antony Starr coming across as Wolverine’s long lost brother, snarling everywhere and walking like he’s got an invisible barrel under each arm. This is a man who has spent fifteen years in prison, having to learn to fight for his very life. Basically, he is one tough little bastard as well as being a very unconventional sheriff! The town of Banshee is unofficially rum by Kyle Proctor, a cast off from the local Amish community (who are used well throughout) who is unsurprisingly Hood’s second biggest pain in the arse. The biggest, of course, is the guy trying to kill him, but to give more info about that guy would be spoileriffic, so I’ll not go there. 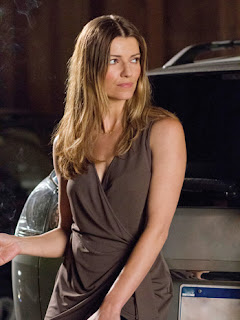 Yes, She Does Get Jiggly!

Banshee is about as adult a drama as you are going to get, telling a very well structured story and racking up the tension with every episode. It drip feeds information at just the right pace, and is full of action. The first series runs at ten episodes, and does not leave you with a cliffhanger (great idea, by the way). Series two has been commissioned, and hopefully will follow the same path, telling a single ten episode story. Naturally, it’s not going to be to everyone’s taste, but I was gripped week by week, and I would rate this alongside Spartacus and Game Of Thrones as one of the best adult drama series of the last decade.

THE fight of the series from Episode Three - If you like this, you really need to watch the show: