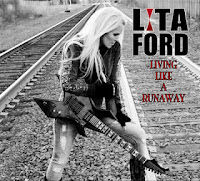 Lita Ford’s last album, “Wicked Wonderland”, was a bit of a mess, although it certainly had it’s moments. The main problem was that it wasn’t the Lita Ford we all wanted, and the blame fell (quite fairly) on the shoulders of her now ex-husband Jim Gillette. Well, Jim is history now, and Ford has made the sensible decision (or had it made for her) of teaming up with accomplished guitarist and songwriter Gary Hoey to produce “Living Like A Runaway”, the title a shameless callback to Lita’s early years with the Runaways.

The best news of all is that there are no attempts here to make Lita Ford a grungy, kick ass modern rock chick. It’s not a blatant 80’s throwback, mind, just a cool album with lots of catchy melodic hard rock songs on it. Sometimes that’s all you want, and personally I’ve listened to it a couple of dozen times now without getting the least bit sick of it. Lita sounds great, and although the tracks are a little more aggressive than the likes of “Kiss Me Deadly” they’re still very melodic. There’s a few beautiful ballads, notably “Mother”, a track filled with love and anguish and sung superbly by Lita. Nikki Sixx contributes a track, “Songs To Slit Your Wrists By”, and it says something that this is the most generic and uninspired track on the album, although it’s still a fun listen. Another standout is the title track, which starts out similar to “We All Die Young” and turns into a very nice, laid back introspective little song about Lita’s musical beginnings.

“Living Like A Runaway” is one of those albums that starts off as good, getting a little better as you listen to it more. There’s no need to force yourself to like it, just sit back and enjoy the return of a well loves vocalist with one of her best song collections yet. After the last album I wasn’t that bothered about Lita Ford either way, but now I want to see her tour and make something of what can justifiably be called a quality comeback album.
Posted by Reviews Ed at 11:07